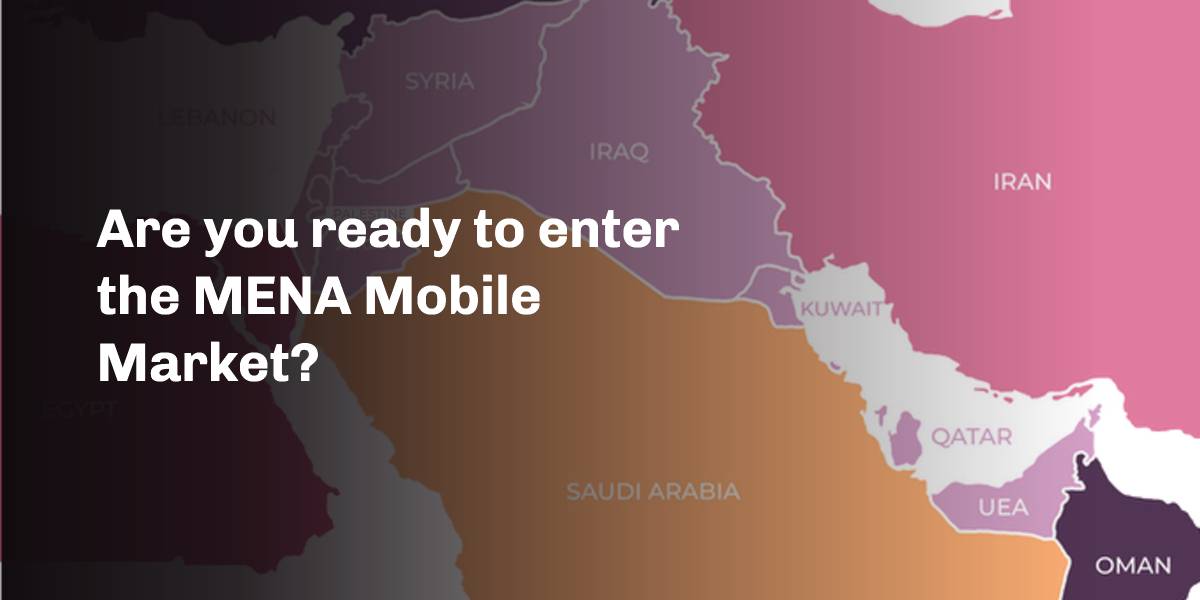 At the lowest point on earth, more than 700 mobile game experts, developers, and investors will gather to discuss the current and future of the Middle East and North Africa mobile game industry. After two years of organizing it online, Pocket Gamers Connects Jordan and the Jordan Gaming Summit return.

What makes the Middle East and North Africa a rapidly growing region, and why are their users so relevant?

Globally, mobile gaming is booming, and emerging markets like the Middle East are on the cusp of growth, with developers creating innovative, high-quality games and publishers offering localized international games that users enthusiastically embrace. All efforts provide a much-needed boost to the region’s digital economy and help to promote social and cultural interactions.

Due to the region’s growing population and smartphone ownership, mobile gaming has tremendous potential to become a significant force.

With 66 percent of the population playing games on their mobile devices, the region has the world’s highest rate of gameplay on mobile devices, higher than the United States, which is estimated at 55 percent.

As it grows rapidly, governments and private investors scramble to get in on the action as all indicators predict that mobile games will play a significant role in value-added services and the region’s digital economy soon.

However, few small- or medium-sized Western developers publish games in the Middle East and North Africa (MENA) region due to the lack of a comprehensive understanding of the MENA games market.

As MENA has tremendous growth potential, many game companies are now focusing on localizing their games in Arabic, allowing them to tap into the vast Arabic-speaking market.

MENA Consists of 22 countries with a population of 350 million people and mobile penetration of over 100%, and the number of mobile gamers is expected to reach 178 million this year.

But what future trends will shape the mobile gaming landscape in the Middle East? Here are a few thoughts:

– eSports will continue to grow in popularity, with tournaments and events being held regularly across the region.

– Mobile games will start to mirror western markets in genres, and we will see more casual and hyper-casual gamers.

So there you have a few predictions for the future of mobile gaming in the Middle East. Exciting times are ahead!

As the game industry booms, games are being created and published for every possible platform and audience. But what about Arabic-speaking countries in the Middle East and North Africa region? What is the process for publishing games in these countries?

The process of publishing games in Arabic-speaking countries is not as complicated as most foreign developer may think. You need to consider a few things, such as the language of the game, the cultural sensitivities, and which part of the MENA region you plan to publish.

Mobile gaming is one of the fastest-growing sectors in the entertainment industry. In 2021, global mobile game revenue reached over 116 billion US dollars, which is expected to rise to almost 138 billion by 2025.

The vast majority of this growth comes from so-called “emerging markets,” such as the Middle East. The size of the Middle East and North Africa gaming market is projected to increase 19 percent to more than $5 billion by 2025.

There are many reasons for this rapid growth in emerging markets. Firstly, the rollout of high-speed mobile data networks has made it possible for people in these regions to play games on their phones in ways that were not previously possible.

Secondly, the price of smartphones and tablet devices has fallen sharply recently, making them much more affordable for a broader range of people. And thirdly, there is a growing appetite for mobile games in these regions as people look for new and exciting ways to entertain themselves.

So, what does the future hold for mobile gaming in emerging markets? Here are three things to look out for:

1. More localized games: One of the key trends we are seeing is the development of more localized games specifically for emerging markets. This could involve changing the graphics and gameplay to suit local tastes, to creating entirely new games based on local folklore or history.

2. Greater investment: As the potential for mobile gaming in emerging markets becomes more evident, we will likely see a lot more investment flowing into the sector from local and international investors. This will provide a boost to game developers who are looking to create new and innovative products for these regions.

The future of Mobile Games in Emerging Markets

Mobile games are becoming increasingly popular in Emerging Markets like the Middle East. The combination of affordable smartphones and high-speed mobile internet is driving this trend.

There are a few factors that make mobile gaming particularly attractive in these markets:

-Low barriers to entry: Smartphone ownership is growing rapidly in Emerging Markets, and even entry-level devices are powerful enough to run most games smoothly. In addition, many games are designed to be played in short sessions, which is perfect for busy lifestyles.

-High engagement: Mobile games are highly engaging, and players can easily spend hours playing them. This makes them an ideal platform for ads and in-game purchases.

-Localization: Many game developers are beginning to tailor their games for specific regions. This includes translating the game into local languages and designing content that appeals to local tastes.

If you decide to publish the game in English, you must ensure that the English text is simple and use standard English Vocabulary.

There are many Arabic-speaking countries, each with its dialect and cultural norms. Considering these differences will require you to customize your game and marketing strategy.

The process of publishing games in Arabic-speaking countries is not complicated, but it requires careful planning. By considering the language of the game, the cultural sensitivities, and the part of the region targeted, you can ensure that your game is a success in these markets.

There is no one-size-fits-all answer to the question of how best to localize a mobile game for Arabic-speaking markets, as the approach you take will vary depending on the culture and demographics of the target region. However, there are a few best practices that you can follow to give your game the best chance of success in the Middle East.

One crucial consideration is tailoring the game content and visuals to appeal to Middle Eastern players. This involves considering cultural nuances and preferences, as well as the region’s current trends and popular genres. For example, while puzzle and strategy games are popular in the West, Middle Eastern gamers prefer action and adventure games.

It’s also essential to ensure that your game’s user interface is localized for Arabic-speaking players. This includes using Arabic fonts and displaying text and menus in the appropriate direction (right-to-left instead of left-to-right). You may also need to adjust the gameplay to ensure that it is accessible and engaging for Arabic-speaking players.

To maximize your game’s chances of success in the Middle East, localizing it precisely for the region is important. Taking the time to understand Arabic-speaking gamers’ cultural nuances and preferences properly will help you create a game that resonates with this audience.

The future of mobile games in the Middle East is an exciting and growing market. With the rise of smartphones and tablet ownership, as well as the increasing popularity of mobile gaming, the region is poised for rapid growth in this area.

Several factors are driving this growth, including the large and young population in the region, the high level of mobile phone and Internet penetration, and the growing disposable incomes. In addition, many countries in the region lack traditional console gaming options, creating a demand for mobile games.

The Middle East is already home to many successful mobile game developers and publishers, and this is expected to continue to grow in the coming years. Some key markets in the region include Saudi Arabia, Egypt, UAE, Kuwait, and Qatar.

With such enormous and untapped market potential, there are numerous opportunities for developers and publishers looking to enter the Middle East gaming market.

Across the globe, mobile games are growing in popularity. In the MENA region specifically, the growth in this industry is higher than in other areas.

Why is the MENA region such a significant market for mobile games?

1. MENA is a young region with a large population.

2. Mobile phone penetration is high in the MENA region.

A high mobile phone penetration rate is another reason the MENA region is an exceptional market for mobile games. In the region, over 70% of the population has a mobile phone. This means that there is a large audience for game developers to target. In addition, many people in the region have access to high-speed internet, which is necessary for playing mobile games.

3. The MENA region is home to many wealthy people.

The MENA region is home to many wealthy people. The region has the highest concentration of millionaires in the world. This means that there is a large market for high-priced mobile games. In addition, mobile game industry businesses can access funding from venture capitalists interested in this market.

4. The MENA region is a regional hotspot for digital activity.

The MENA region is a regional hotspot for digital activity. This means that there is a high demand for digital products and services, including mobile games. In addition, the region has numerous tech-savvy consumers who are interested in playing and downloading mobile games.

While the MENA region is a great market for mobile games, there are some challenges that businesses in this industry must face. One challenge is that most people in the region do not have a credit card, which is necessary to make in-app purchases. In addition, the language barrier can be a challenge for businesses looking to market their games in the region.

Despite these challenges, the MENA region is a great market for mobile games. Businesses that want to succeed in this industry should consider targeting the region’s large population.

Mobile operators are helping to grow the mobile gaming market by providing various services and features that support gaming.

Additionally, mobile operators can help grow the gaming market by offering plans with unlimited data for gaming. This allows gamers to play their favorite games without worrying about data caps or overage fees.

Another way that mobile operators can help grow the gaming market is by offering monthly gaming subscriptions. This allows gamers to pay a fixed monthly price for unlimited access to a library of games. This can be an excellent option for gamers who want to explore various games without purchasing them individually.

Mobile operators can also help grow the gaming market by offering pre-paid gaming cards. These cards can be used to purchase in-game content or unlock games’ premium features. This is a splendid option for gamers who would like to avoid subscription fees or who don’t want to be locked into a long-term contract.

This allows gamers to share their gaming experiences with friends and followers online. This can help promote games and drive engagement with gaming communities.

The mobile gaming industry in the Middle East and North Africa is poised for tremendous growth in the coming years. The region is home to a large young population, with a growing middle class, increasingly spending on discretionary items like gaming. In addition, the region has seen strong mobile and broadband penetration growth, enabling more people to access gaming content. The region also has several favorable conditions for game development, including a growing talent pool and an ever-increasing supportive regulatory environment. As a result, the Middle East and North Africa are expected to be a significant growth markets for the mobile gaming industry in the coming years.

So what does the future hold for mobile gaming in the Middle East and North Africa? Only time will tell, but one thing is for sure – it looks very bright indeed.